The Centipede, the Toast Slice and the Avant-gardist – the 19th tour of Germany for vintage commercial vehicles starts out at the Mercedes-Benz plant in Wörth

Stuttgart/Wörth am Rhein – What goes around comes around: In 1996, the Mercedes-Benz plant in Wörth, not far from the city of Karlsruhe, provided the perfect backdrop for a fascinating classic vehicle event on the occasion of the 100th anniversary for its truck production. Around a quarter of a century later, 73 heavy classics will be setting off from Wörth on September 2, 2022 on the 19th tour of Germany for historic commercial vehicles. Following in the footsteps of Gottlieb Daimler as the inventor of the truck and Carl Benz as the inventor of the bus, Daimler Truck is delighted to support the tour organized by the Stuttgart-based publishing house ETM Verlag in cooperation with the freight forwarder Fehrenkötter. On September 1, the parking lot opposite the Industry Information Center (BIC) directly outside the plant gates will serve as the assembly point for the impressive classic vehicle fleet. Daimler Truck will be supplementing the fleet with several classic vehicles from its own collection. Three of these vehicles will be heading off on a long journey this year, leading them from Wörth via Besancon, Lyon, Clermont-Ferrand, Paris and Epernay in France as well as Büllingen in Belgium back to Wiehl in Germany over ten days.

It's official model designation is the Mercedes-Benz LP 333, but to its aficionados it is affectionately known as the "Centipede". This rare three-axle vehicle with its two steered front axles is an eye-catcher for any classic vehicle event. The design may seem a little strange nowadays, but it actually represented a reaction to some even stranger legislation: At the end of the fifties, the permissible gross combination weight in Germany was reduced from 40 to 24 tons and the maximum vehicle combination length was cut from 20 to 14 meters. Only three-axle vehicles could have a permissible gross mass of 16 tons as solo vehicles. What used to be Daimler-Benz AG at the time reacted with a three-axle vehicle featuring two steered front axles, the LP 333. Its six-cylinder in-line engine protrudes a fair way into the cab and delivers a performance of 147 kW (200 hp). After just a few years, the drastic weight restriction became history. But the LP 333 remained. It may not have been part of the range for long, but it has remained in the memory of many – just like this old wagon with its lovingly designed body.

The Toast Slice: an angular cab with sixties styling

Daimler Truck calls it the cubic cab, classic vehicle aficionados refer to it as the “toast slice”, while others call these trucks with their angular cabs the “advent calendar”, given their numerous flaps and service access points: Mercedes-Benz heavy trucks from the sixties have their own charm with their clear-cut and straight-forward design. They were the models to introduce the type designation and nomenclature relating to the tonnage and engine output that still persists today. In this case, this means that this is a Mercedes-Benz LP 1620, i.e. it boasts a permissible gross vehicle mass of 16 tons and an engine performance of 149 kW (202 hp). Its generous glazing, rectangular radiator grille and headlamps that have been integrated into the bumper are typical vehicle features. This particular platform truck has already covered 2.4 million kilometers in mileage.

The Avant-Gardist: a beautiful and technically unique Setra S6

It's the Setra brand's most attractive model of all time: This compact bus, with a length of just 6.7 meters, was introduced in 1955 and always puts a smile on visitors’ faces at events. This vehicle with its contemporary red-and-white paintwork comes from the brand’s remarkable collection of vintage vehicles. From a technical perspective, the Setra S6 boasts amazing features, from the body's roof-edge glazing to its independent wheel suspension with rubber torsion springs on both axles. With a self-supporting body and a rear-mounted Henschel engine, the smallest ever produced Setra used the same basic technical structure as its larger sister vehicles. The vehicle taking part in the tour of Germany dates back to 1962 and originally belonged to the University of Applied Sciences in Ulm. In 1972, it was replaced by a different vehicle that was more suitable for torque measurements. The as-new S 6 with a mileage of 25,000 kilometers was then included in the vintage vehicle fleet and the red saddle was subsequently added to match the old original appearance.

The Daimler Truck Mercedes-Benz plant in Wörth will be celebrating its 60th anniversary next year. It's the location where the Mercedes-Benz Actros, Arocs and Atego trucks, as well as the special trucks Econic, Unimog and Zetros are produced for customers in more than 150 countries around the world. On the one hand, the plant already locally produces emission-free trucks and, on the other, it looks after numerous trucks marking the great history of Mercedes-Benz commercial vehicles. In 1996, a legendary vintage vehicle meeting took place at the Wörth plant to mark the “100 Years of Trucks” anniversary. 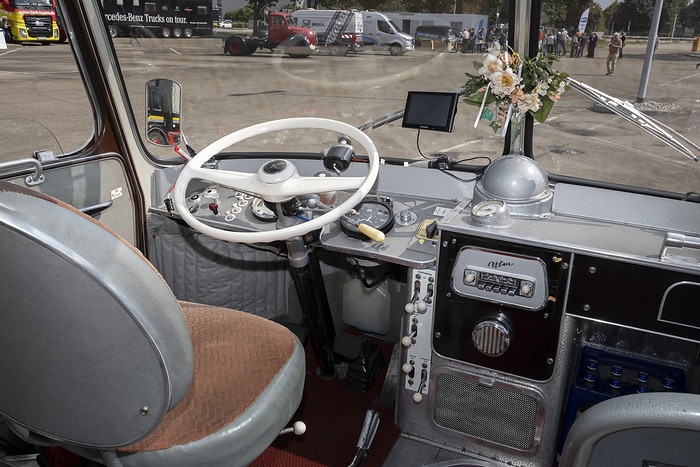 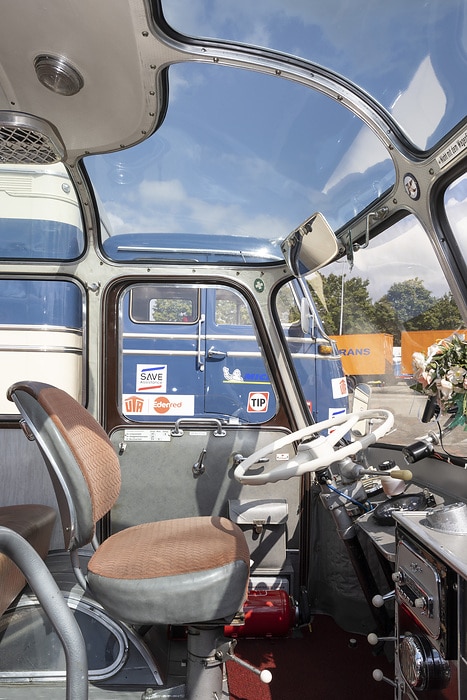 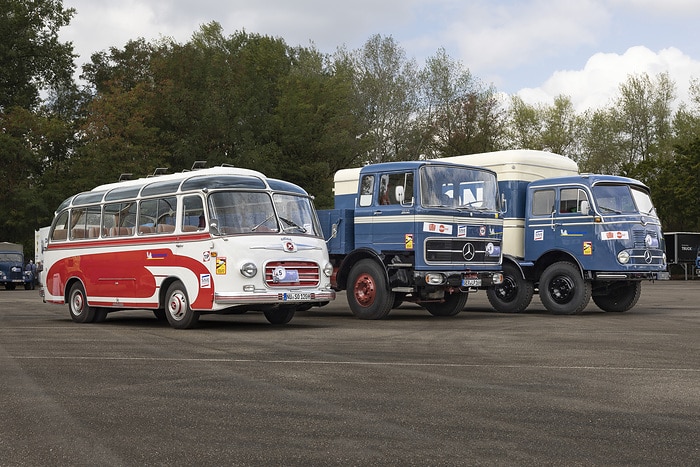 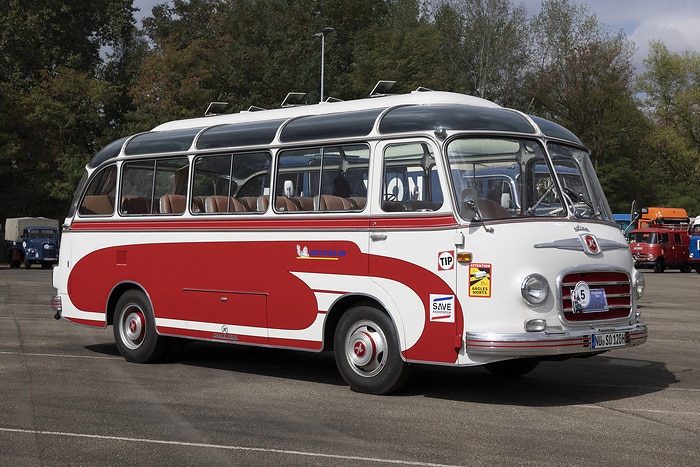 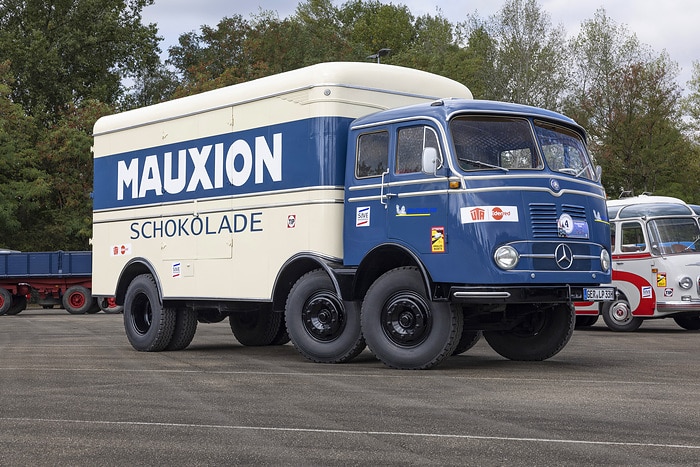 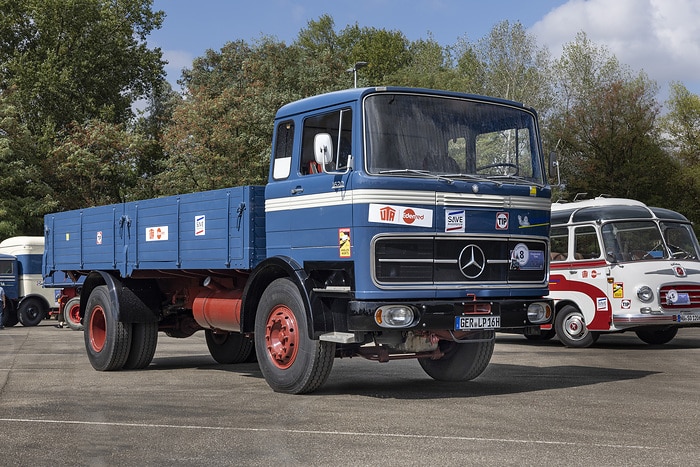