Ötigheim / Stuttgart – The battery electric Mercedes-Benz eActros is in operation at logistics company Logistik Schmitt, located near Rastatt in southern Germany. Practical testing of the all-electric heavy-duty truck has been carried out in the region over the course of several years now and, as part of this, comparative drives with the eWayBW catenary project are also planned to take place in the Murg valley and surrounding areas. The official handover of the eActros to Logistik Schmitt took place at the beginning of the year as part of the Daimler Trucks annual press conference in Gaggenau.

The 25-tonne vehicle commutes between the warehouse facility of Logistik Schmitt in Ötigheim and Rastatt's Mercedes-Benz Gaggenau plant approximately seven kilometres away. Logistik Schmitt uses the eActros instead of a conventional diesel truck for the transportation of transmission housings. In doing so, the eActros with its range of up to 200 kilometres, covers a daily distance of approximately 168 kilometres as part of a demanding 3-shift operation.

Experience with the eActros so far strengthens aim of Mercedes-Benz Trucks: Start of series-production from 2021 onwards

Stefan Buchner, Head of Mercedes-Benz Trucks: “The Mercedes-Benz eActros is now integrated into daily operations by our test customers in Germany and Switzerland. Here, the eActros has already covered tens of thousands of kilometres. Even fully-loaded and regardless of hot or cold temperatures, it successfully completes its daily duties. This spurs us on in our aim to enable locally emission-free distribution with heavy-duty, series-produced trucks from 2021onwards. We are pleased that, together with Logistik Schmitt, we are able to further expand the testing of the eActros. We will also take the findings of this testing phase and apply them as part of the comparative drives planned with the eWayBW catenary project. First positive feedback from Logistik Schmitt has left us very optimistic."

The eActros in practical operations at Logistik Schmitt looks promising

Rainer Schmitt, Executive Partner of Logistik Schmitt: "As a future-oriented logistics provider, we want to contribute towards enabling our sector to operate in an environmentally friendly way. With the Mercedes-Benz eActros, we can already drive both quietly and locally emission-free while remaining completely mobile. Practical testing has shown that the eActros is well suited for use in distribution operations like our own. It is reliable, always ready for duty and its range easily covers our required daily distances."

"In close collaboration with the experts at Mercedes-Benz Trucks, we clarified key questions concerning the scope of our operations and the required charging infrastructure. When we started using the eActros, our drivers also received a comprehensive training course and instructions as to how to operate the electric truck. The eActros now transports as much as twelve tonnes of freight and drives twelve tours on a daily basis, thereby covering a total of 168 kilometres. It is charged using a mobile charging station at our own premises in between the individual tours whilst unloading and loading takes place," explains Schmitt.

The next project phase: a further-developed version of the eActros in comparison with catenary truck

As part of the eWayBW project, the transport of goods on the B462 near Rastatt will be partially electrified, whereby diesel-hybrid catenary trucks will be tested. In parallel to this, tests of the eActros will take place by way of comparison with the catenary project. As part of this testing, a further-developed version of the eActros with higher payload capacity and greater range will be used.

Using the further-developed version of the eActros, Logistik Schmitt will also deliver axle components along the 14 kilometres from the warehouse in Ötigheim to the Mercedes-Benz plant in Gaggenau – mainly via the B462. This route is, for the most part, the same as that used for the catenary truck project. The specifications of the eActros will be comparable with those of the catenary truck. This parallel testing of the eActros and the catenary trucks will take place for around one year and will deliver the most important data and findings necessary for comparing both concepts and its use cases.

Planned within this phase is a direct comparison with the catenary truck. Here, the eActros will spend around one to two weeks driving the exact route of the catenary project truck. This will serve to validate the second phase. During this direct comparison, the eActros will transport rolls of paper the 18 kilometres from the paper mill in Gernsbach-Obertsrot to the Fahrner logistics site in Kuppenheim – just like the trucks involved in the overhead-lines project.

Conventional diesel Actros as a starting point for the concept comparison

A conventional diesel Actros equipped to the Euro VI emissions standard and fitted with measuring equipment will serve as a neutral starting point for the comparison of the concepts and will drive along the overhead-lines route. It will then be possible to compare the energy consumption of the electric trucks – battery-electric and catenary – with the consumption of the diesel truck.

Currently no plans for catenary trucks at Daimler

As a global manufacturer, Daimler is working on future-oriented solutions that have great potential for worldwide implementation. Due to the high infrastructure costs involved, the company does not see potential in overhead lines at present – also in view of the rapid development of battery and fuel cell technology.

About the eActros "Innovation Fleet"

In addition to the eActros operations in the Murg Valley, there are currently ten vehicles from our so-called eActros "Innovation Fleet" on the streets. As part of practical testing of the eActros, the 18 or 25-tonne vehicles are put through their paces by 20 customers from various sectors as part of their regular daily operations. The tests of this "Innovation Fleet" are made up of two phases, each with ten customers. Feedback from these practical tests flows directly into further development of the eActros right up until its readiness for series production. The development and testing of the heavy-duty electric truck in short-radius distribution operations is sponsored as part of the "Concept ELV²" project to varying degrees by the German Federal Ministry for the Environment (BMUB) and the Federal Ministry for Economic Affairs and Energy (BMWi).

The eActros is based on the frame of the Mercedes-Benz Actros. However, the vehicle's architecture has been resolutely designed around an electric drive system and thus features a high percentage of vehicle-specific components. Two electric motors near the wheel hubs of the rear axle provide the drive, each delivering an output of 126 kW and 485 Nm maximum torque. Furthermore, the transmission ratio used sees this brought up to 11,000 Nm on each wheel. The drive power is therefore on par with a conventional truck. Lithium-ion batteries with 240 kWh capacity provide the eActros with the required energy. Depending on the available charging output, the batteries can be charged completely within as little as two hours (at 150 kW). 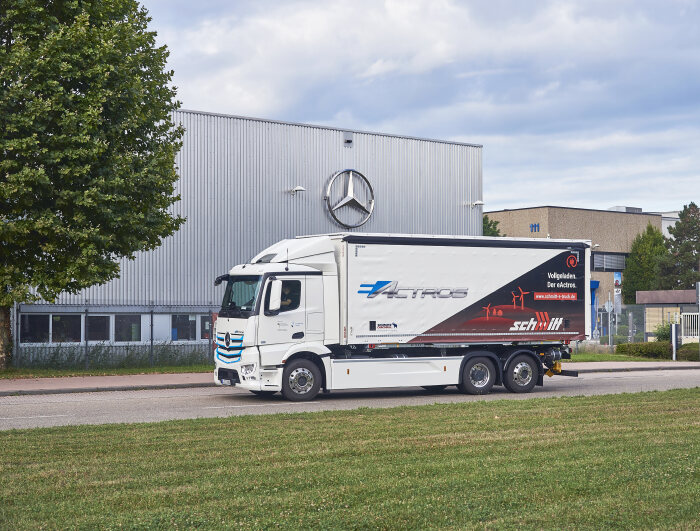 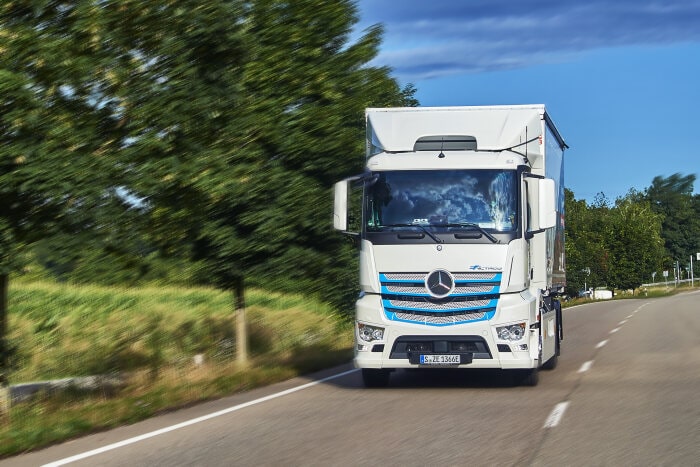 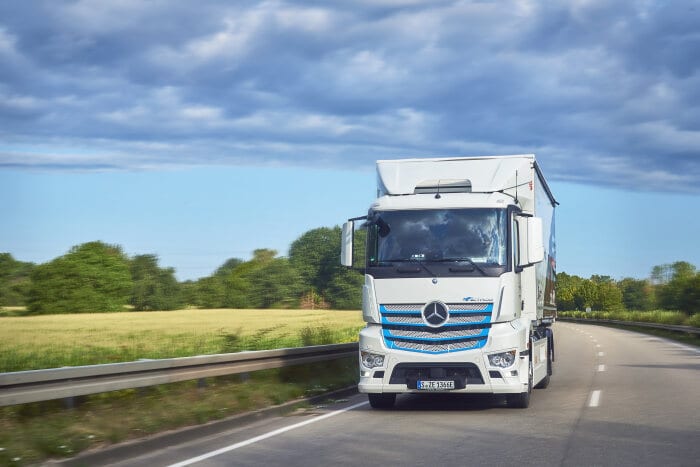 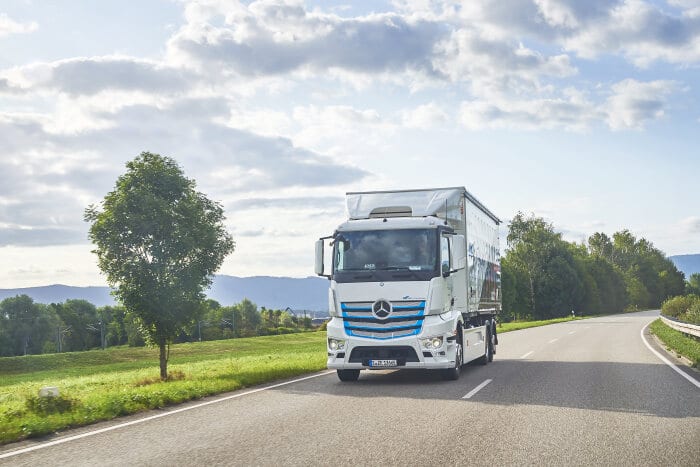 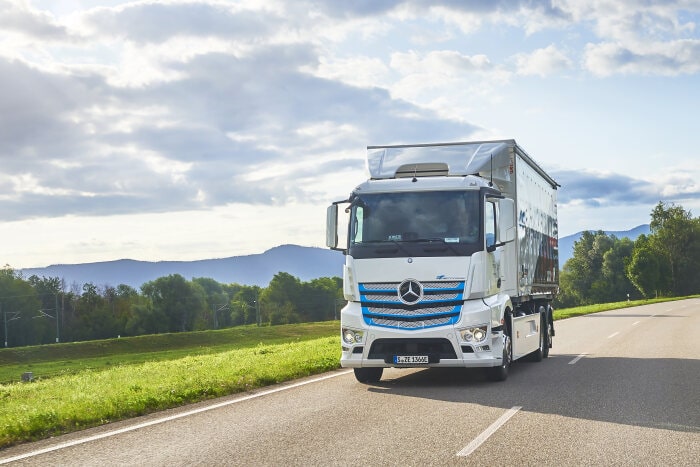 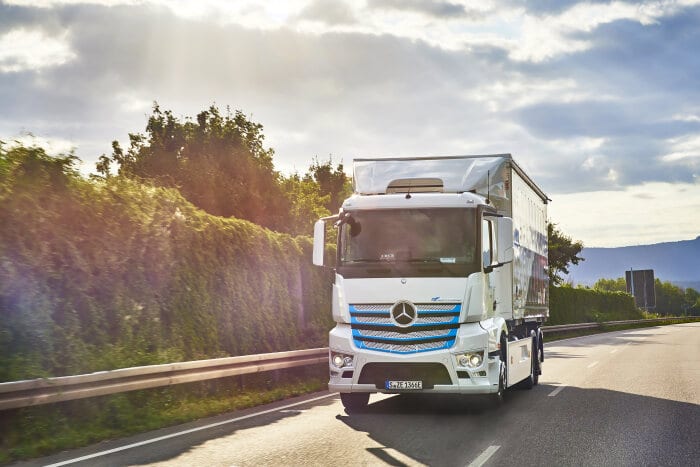 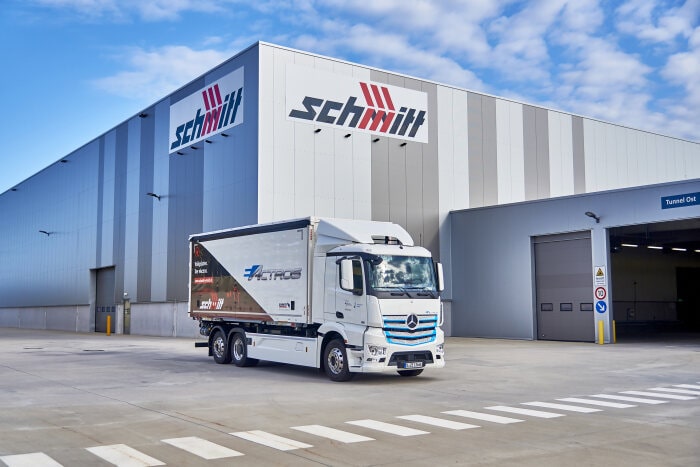 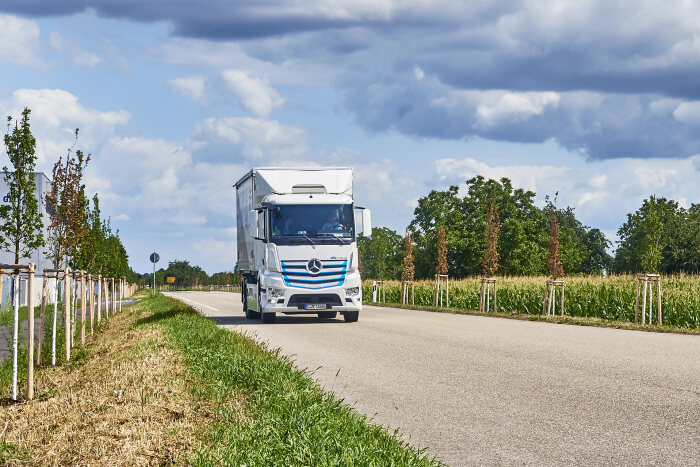 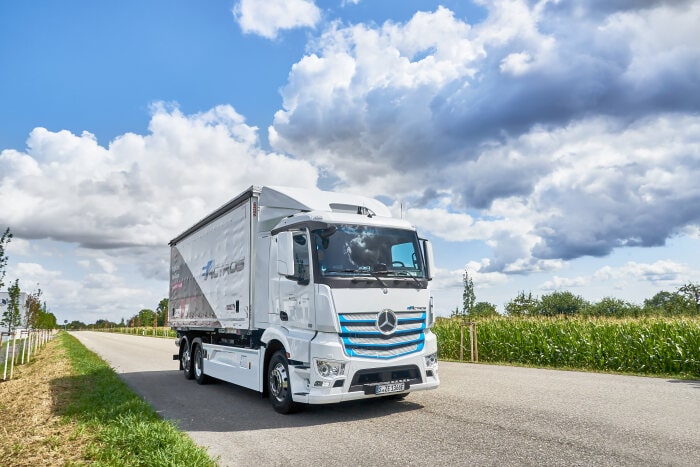 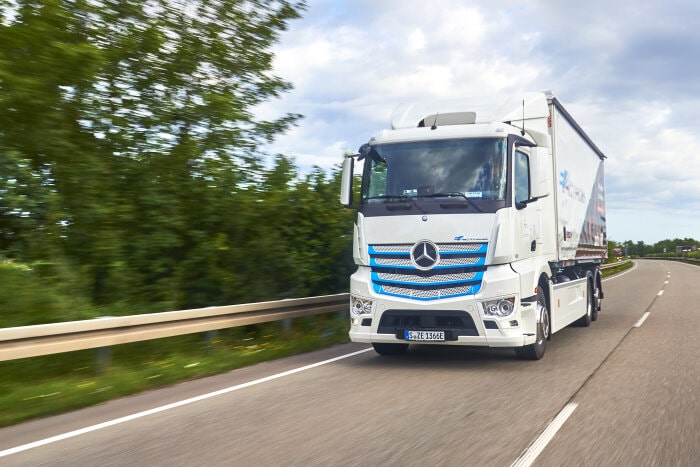 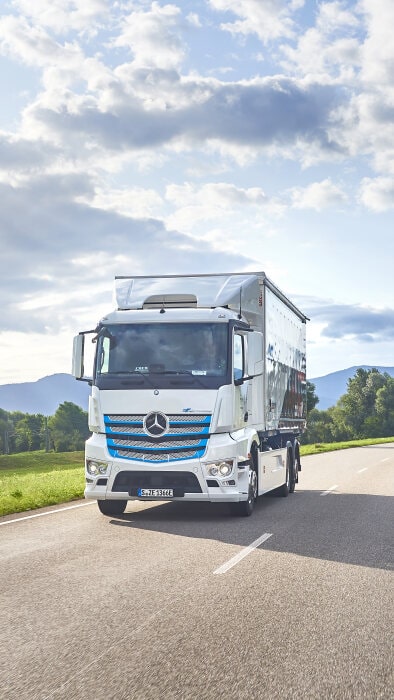 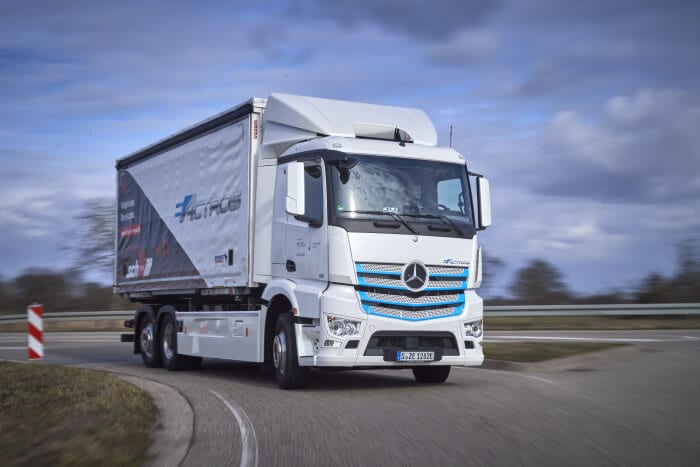 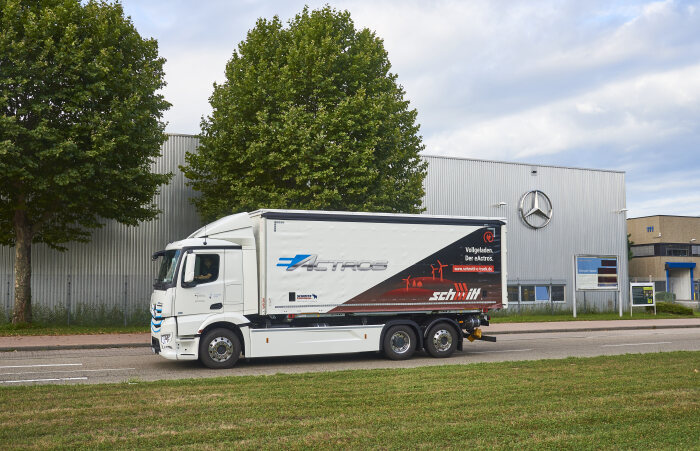 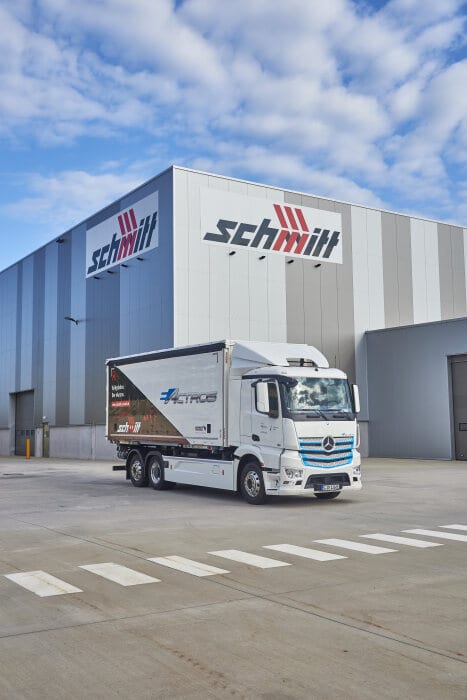 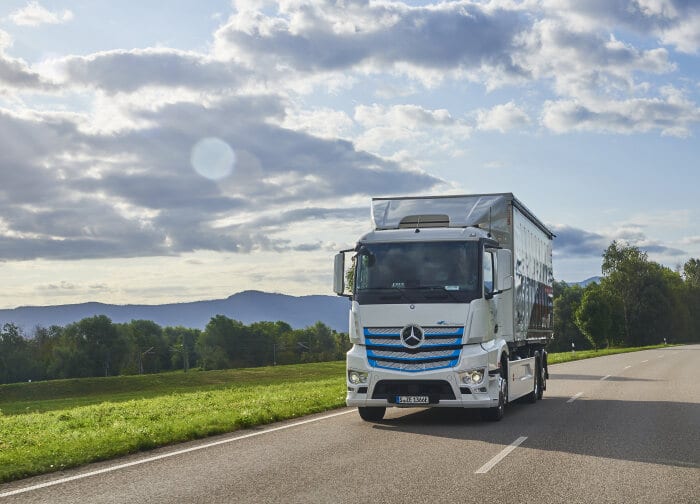 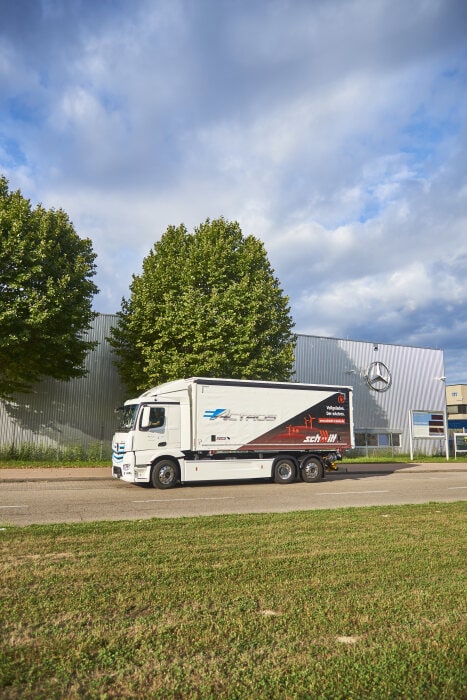 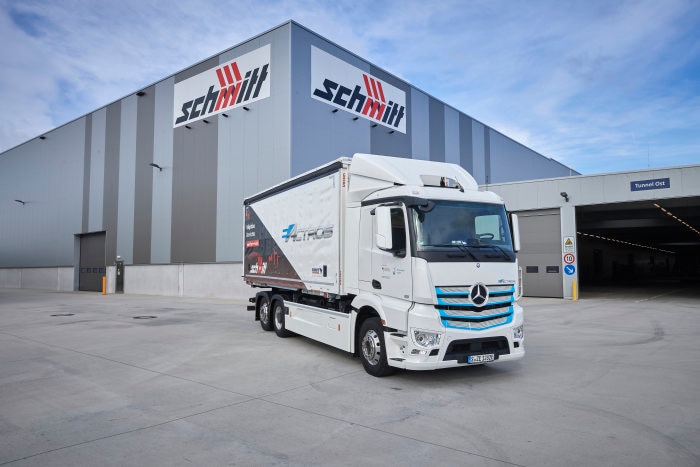 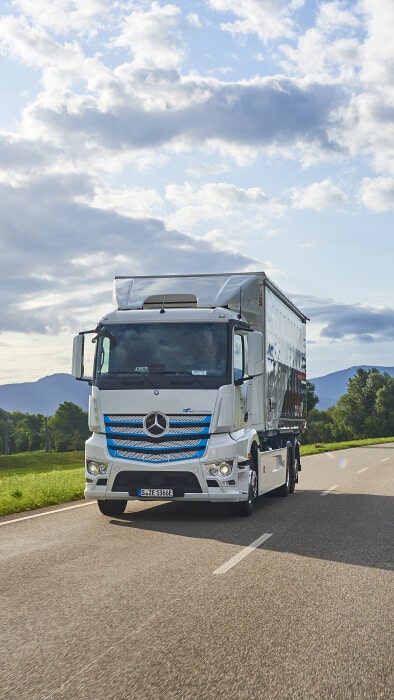