25 years of service innovations for buses: Omniplus is celebrating a special birthday

Full concentration on buses: services specifically aimed at buses are the recipe for the success of the Omniplus service brand under the roof of Daimler Buses. In 1996, shortly after EvoBus was set up, Omniplus started to revolutionise the service world of the bus business. Then as now, the basic idea was to provide an effective and above all a bus-oriented service from one source for both the Mercedes-Benz and Setra brands. The innovative power of Omniplus has continued unabated until today, as is shown by current innovations such as spare parts from the 3D printer and the revolutionary digital service world of Omniplus On.

1996: Omniplus started with a whole bundle of service innovations

Services for buses begin with classic services such as maintenance and repair. Omniplus can deal with that – and much more. Omniplus started with a whole range of service innovations in 1996: its service centres and the service network, the ServiceCard and new types of maintenance packages called ServiceCheck. Also, right from the start Omniplus offered further services such as the established and popular drivers' training courses.

Two years after it was set up, Omniplus with its newly introduced service contracts once again set new standards for services specifically for buses. At the same time, in a central warehouse in Neu-Ulm, the spare parts organisation of Mercedes-Benz and Setra, which had previously operated separately from each other, was merged into one. In the same period of time, Omniplus professionalised its trade with used Mercedes-Benz and Setra buses – later, in 2013, that section became a separate business division with the brand name BusStore.

2004: Entry into the world of digitisation with an online service directory and an online shop

Omniplus chose digitisation early on. As early as 2004 an online service directory was available. At the same time, Omniplus did pioneer work by setting up its online shop which companies could use to easily buy parts for their own workshops. Also in 2004, Omniplus introduced a multi-layer system of service centres. Throughout Europe, these are classified according to their range of services, either as BusWorld and BusWorld Home, BusPort or BusPoint. Ten years after the launch of Omniplus, about 540 service centres across Europe cared for bus corporations and their buses – the largest service network in Europe for buses. Since 2008, all the service centres have been supplied from the huge, state-of-the-art Spare Parts Logistics Centre in Neu-Ulm, where about 130,000 parts are stored ready for use. For small repairs, Omniplus introduced its prompt, reasonably priced SmallRepair service that same year.

In 2009 Omniplus initialised the first bus-specific fleet management system called BusFleet. Data transfer, analysis of digital tachographs and driving style documentation were only some of the buzzwords. At the same time, there was a new addition to the ServiceCard: it was individually adapted with the tiered concept of ServiceCardBasic and Premium. Similarly, from 2012 Omniplus adjusted its service contracts with basic and premium versions.

From 2015, Omniplus was in the news with another service: with the new BusDepot Management, authorised service centres, and thus Omniplus staff, provided services directly at customers' workshops. The principle is that no one knows buses better than the manufacturer – so who is better able to maintain and repair them? Service contracts for newer used touring coaches of the Mercedes-Benz and Setra brands were another new feature. With the new programme entitled BestAge Repair, the company also provided services for older buses appropriate to the current residual value. From 2016, Omniplus went in a completely different direction with the new long-distance coach service, tailor-made for the real mile-eaters.

2017: Omniplus On – the new digital world of service

In autumn 2017, Omniplus presented a completely new service world: linking up the vehicle, driver, company and service with each other, thus creating added value for customers – that is now Omniplus On. Here, a wide range of current and future digital services for buses are bundled in one single portal. Omniplus On integrated existing services and new offers such as Omniplus Uptime.

Since then, Omniplus Uptime has opened up fascinating options: Omniplus Uptime continually checks the status of the vehicle systems in real time. If there is a sign of a fault in the vehicle, the diagnosis information is analysed and interpreted. If the need for repair or maintenance work is detected, the bus company direction is sent information on the cause and how to deal with it. If acute problems are about to arise, the bus corporation is informed by Omniplus 24h SERVICE within minutes. If required, Omniplus can search for a workshop and organise the repair work. In this way, an unplanned stop can be prevented or a workshop appointment that cannot be postponed reduced to the bare minimum.

Jubilee year 2021: all-round service for buses from Mercedes-Benz and Setra

Today, Omniplus guarantees all-round service for buses from Mercedes-Benz and Setra. If a bus should encounter problems en route, the 24h SERVICE is ready 24/7. More than 600 service centres, from the Arctic Circle to Sicily and from Ireland to Perm in Russia just west of the Urals, are at your service and form the tightly knit Omniplus Service network.

Whether maintenance or repairs are needed, GenuineParts or Genuine Remanufactured Parts, service contracts, ServiceCard or training courses for drivers and workshop staff – the bus-oriented services from Omniplus are exemplary and unique in the business. In addition, spare parts are increasingly being produced via 3D printer, and soon possibly for the first time even locally from the printer directly from your service provider. Also, 3D printing makes personal decor parts for the interior possible.

Bus companies can insure their vehicles individually via service contracts. For the Mercedes-Benz eCitaro with fully electric drive, Omniplus has developed specific eService contracts and also a multi-stage training system for workshops. And if fleets wish to concentrate on their core competences, Omniplus with BusDepot Management and its own staff even take care of service in the customer's workshop. Special services, such as BestAge Repair for older vehicles, round off the range.

The most outstanding recent innovation is Omniplus On. Under this roof, Omniplus clusters its digital services and is constantly adding new services which are designed to make the bus business more simple and efficient. Omniplus On is supported by four connected pillars. Omniplus On advance ensures that bus companies enjoy maximum availability of their fleet. Omniplus On monitor brings together telematics services for fleet management. Omniplus On drive assists the driver, starting with the prescribed daily departure checks. Omniplus On commerce enables bus firms to enjoy a rapid and targeted purchasing process of parts or digital services in the Omniplus eShop around the clock.

Regarding the COVID-19 pandemic, too, Omniplus acted swiftly: for numerous bus models from Setra and Mercedes-Benz, Omniplus developed protective driver doors and partitions for retrofitting, to protect the driver from infection. By installing high-performance particle filters with an antiviral functional layer, companies can reduce the risk of infection in coaches even further. This is an important step towards making the business of transport companies and private bus companies safe despite the crisis and enabling perspectives for operating profitably in the future.

25 years after the start of Omniplus, this uniquely broad spectrum of classic and digital services can be neatly divided into five categories: Solutions, Mobility, Expertise, Support and Omniplus On. Bus companies can rely on the new Omniplus brand promise more than ever: "Omniplus. Your Performance Plus". 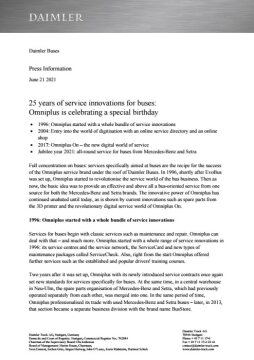 D632606
25 years of service innovations for buses: Omniplus is celebrating a special birthday